Velocity and weight accounts for the amount of energy on impact and yet the 5.56 is one of the most common calibers in the military and civilian world alike. So is the .308 more for a specialized role otherwise why don't more people use it? Well, there are conditions that call for different caliber applications, but when looking at .308 vs 5.56, we'll discuss the calibers, velocities, ballistics from muzzle to terminal and how weight determines stopping capabilities for each round.

A cartridge that is known for its long-range stopping power for many decades is the .308 WIN or 7.62x51 NATO. With a relatively heavy bullet (still on the lighter end of high-power rifle cartridges) the .308 WIN has no issues reaching out to 1,000+ yards with enough energy to make the trip worth it. In the early 1950’s, the turning point of modern military weaponry, the U.S. Military was looking for a round similar to the stopping power of the beloved 30-06, but they needed something with a lot of stopping power in a shorter more manageable cartridge.

Many iterations of 30-06 and .300 Savage were created, stopping somewhere in the middle was the T65 experimental cartridge. Winchester noticed the value in an ideal hunting caliber and quickly jumped on board with the .308 WIN. Finally, it was adopted by the U.S. Military in 1954; it was re-designated as 7.62x51.

Tried and true by our standards today, but at the birth of the 5.56x45 NATO, its future was not so certain. Starting out as the .223 Remington, this cartridge was niche specific. Being high velocity and extremely lightweight meant a soldier could carry far more ammunition into combat and be twice as effective as their predecessors in WWII, but not everyone in charge was so sure.

With many governmental officials thinking the cartridge was too wimpy and the Armalite AR-15 experiencing a high rate of failures, the .223 Remington’s moment in the sun was growing dim. Until 1961, there was a head-to-head match between the AR-15 and M-14 — shooters had far greater accuracy with the AR-15 chambered in .223 Remington. In 1963, .223 Remington was officially adopted by the U.S. Government and re-designated 5.56mm Ball, M193. For 60 years, 5.56 has been going strong all around the world.

It's clear who the big dog in the fight is, but is big always better? Making a comparison between 308 vs 5.56 is like saying would you rather be hit by a tank or a train? NEITHER! Of course, with differences in bullet weight and powder loads the ballistics are going to differ, but they are both extremely effective rounds in their respective elements. 308 Win is a reach-out and hit-hard cartridge while 5.56 is a close to mid-range nail driver. Let’s look a little closer at their specifications before making a choice.

This is a difficult one to compare since they are quite different cartridges. We can look at the numbers for a few dozen different powder loads, bullet types and weights, barrel length and so on but for the sake of brevity we’ll split the difference and look at the most common for both cartridges under perfect conditions.

Looking at the charts below, it's easy to see why these cartridges are still around. They are relatively consistent in their flight path out to 400 yards, maintaining decent velocities and energy out to around the 600 yard mark. Where the .308 WIN pulls ahead is beyond mid-range. Heavier projectile traveling fast, at 800 yards .308 WIN is still impacting with nearly 800 ft-lbs of energy while the 5.56 is just north of 250 ft-lbs Although, this is not necessarily an indicator of impact survivability since the 5.56 can potentially tumble on impact with a target. It is, however, an indicator of the likelihood of whether or not the projectile can penetrate the target or barriers at extended distances. Maintaining high velocities equates to maintaining penetrating power over greater distances. 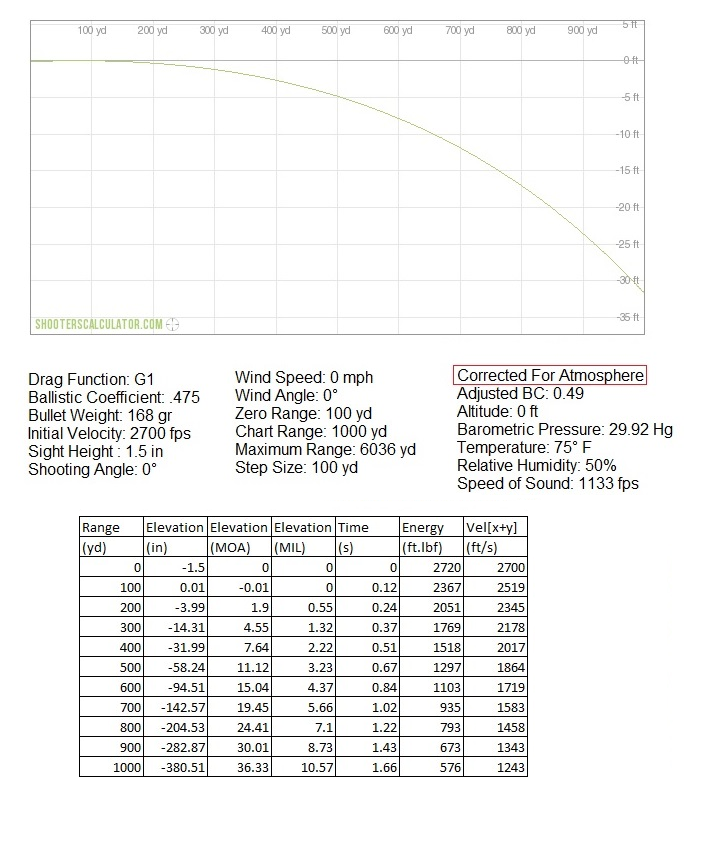 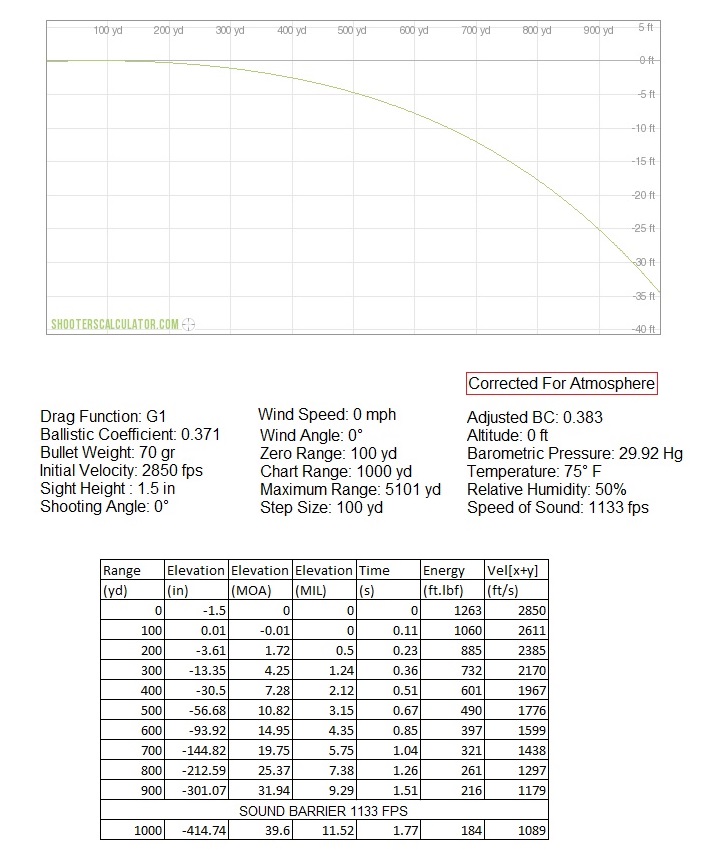 Anyone that has ever fired one or both calibers knows they are not extremely difficult to manage. Whether it's a bolt action or AR platform, they are mild either way when it comes to the full spectrum of recoil from firearms. Looking at the cartridges, you’ll clearly be able to see that the .308 WIN is going to pack a bigger punch on the shooter regardless of platform. Shooting a 5.56 from an AR-15 actually doesn’t have much more recoil than a .22LR.

Less recoil means quicker target acquisition on follow up shots leading to a more consistent grouping. A clear winner for recoil is the 5.56x45mm when it comes to shoulder comfort on long range days.

So far, we’ve touched on weight a little bit, but let’s get down to some specifics with .308 WIN. If you’re looking for a heavy bullet to hunt some bigger game animals with little risk of them running a mile into the woods, .308 WIN comes in grain weights from the 120’s to the 180’s, with the most common hunting loads being 150 to 168 grains. These are quite large and perfect for North American big game like White Tail deer and Black Bear. You guys out West hunting the massive beasts can take that for what it's worth, it’ll work but bigger is always better.

Strictly speaking, 5.56x45 NATO is more limited from 55 to 63 grains. However, there are several types of “5.56” cartridges that have higher bullet weights from 40 to 80 grains. These are great not only hunting smaller or varmint game but also competitions that have targets at distances further than 300 yards.

Let’s not kid ourselves here, .308 WIN takes the crown for stopping power. It’s a heavy bullet traveling at outrageous speeds, it's accurate and packs a wallop. All that together makes this a great cartridge. If you can accurately put rounds on target that dump a ton of energy on impact, that’s the equivalent to flipping a light switch, split second and its lights out. At 200 yards, you’re looking at literally over a ton of force, 2,051 ft-lbs (foot pounds of force) coming in at 2,345 fps on a 168-grain bullet.

Comparatively, the 5.56 at 200 yards is expending 885 ft-lbs on impact if it doesn’t zip right through while traveling 2,385 fps with a 70-grain bullet. Don’t get it wrong, that’s no small thing though when you think about 9mm rarely exceeding 500 ft-lbs at the muzzle, usually staying in the mid to upper 300 range.

Take another look at the ballistics chart above. You’ll see that the accuracy is comparatively the same between 308 vs 556 out to a certain distance. They stay neck in neck with bullet drop out to 600 yards, beyond that, .308 Winchester tends to hold a bit better flight path. Inside 600 yards, the rifle is as good as the shooter and if you are capable of making that shot, so is the bullet.

So which is better?

With all the information out there on this and that, it's easy to get caught up in online opinions. Look at the facts, .308 Winchester and 5.56 (.223 Remington) have been around for almost exactly the same amount of time and their popularity with the Military and Civilian world hasn’t diminished. There’s a reason for that, they are both great when used for the reason they were designed. If you are going to make a purchase, determine what is best suited for your needs and get some practice behind your rifle, neither one will let you down when used in their proper role. There’s a reason we at 5D Tactical work hard to bring you both of the best platforms for 5.56 and .308 Winchester.

Start Your Own Build

Now that you’ve read where they’ve come from and what they can do, get yourself a piece of the awesome history and stopping power that comes from using 5.56 NATO or .308 Winchester cartridges by purchasing your new AR-15 80% Billet Lower Receiver or a AR-308 80% lower receiver today!