It’s easy to forget about the buffer weight in your AR-15. Unless you built the rifle yourself with an 80 lower kit, chances are that you’ve never even seen it before.

It’s important to not overlook the buffer weight because it’s one of the most important parts in creating your experience as a shooter with that gun. You could have the most expensive trigger and muzzle device in the world, but that doesn’t amount for much if the weapon is inoperable.

If you’ve got the wrong buffer weight, your AR-15 could operate sub-optimally, ruining your experience altogether. Fortunately, at 5D Tactical, we’ve drawn on decades of expertise in the industry to compose this guide, so that you’re empowered to find the perfect weight for your weapon.

AR-15 Buffer Weights: Choosing the Right One for Your Gun

AR-15 buffer weights play an important role in the overall function of your gun. When choosing the right one for your firearm, it is important to consider a few factors.

You will also need to take into account the type of ammo you are using. Heavier buffers are needed with slow-moving rounds, while lighter buffers are ideal for high-velocity ammo.

How Does an AR-15 Buffer Weight Work?

When a round is fired from the chamber of an AR-15, gas flows back to push the Bolt Carrier Group (BCG) towards the shooter as it extracts the spent round’s casing. When that BCG recedes, it relies on the buffer weight to send it back into the battery.

This is how the BCG picks up a new round from the magazine and chambers it, getting you ready for the next shot. All that comprises an adjustable rifle buffer is a weight and a spring (sometimes referred to as a “recoil spring”).

Depending on the quality of the spring, and the weight of the buffer, it can help absorb some of the recoil. This provides a smoother cycle of the bolt going back and forth, and creates a better shooting experience with faster follow-up shots.

Which Buffer Weight to Choose

Each buffer will have small individual weights inside that add up to specific weights making it optimal for a certain set of rifles. Depending on the buffer, those individual weights will be a combination of steel and tungsten weights.

Every AR-style rifle is going to run a little differently. A lot of factory built guns will tend to run a little over-gassed so that the rifle will run reliably in any weather condition and with a larger variety of ammunition loads.

Of course, we all prefer a reliable gun over something that doesn’t work. If you’re looking for the optimal buffer weight so that you can fine-tune your AR, these are your options to consider:

This buffer will work for carbine-length ARs, it weighs in at 3.0 ounces, and it’s considered a basic standard (that most buffer tube kits and factory built rifles include) because of its higher reliability. Though buffers may vary in weight, they typically all look similar to the one in the photo above, unless it’s a specialized buffer.

H (Heavy) and H1 buffers are the same thing but are used interchangeably throughout the internet so no need to get confused about this one.

The 20% increase in weight aids in reducing perceived felt recoil and also reduces wear on your AR.

H2 buffers range from 4.5 – 4.7 ounces. If the BCG still feels like it’s cycling too hard, shooters will often choose this buffer to get their carbines to shoot even softer.

Any 16” length AR-15 or shorter should be able to use an H2 buffer, but every gun does behave differently. Therefore, the compatibility is going to depend on how well all of your other parts (such as the gas block, BCG, or muzzle device) come together as well. 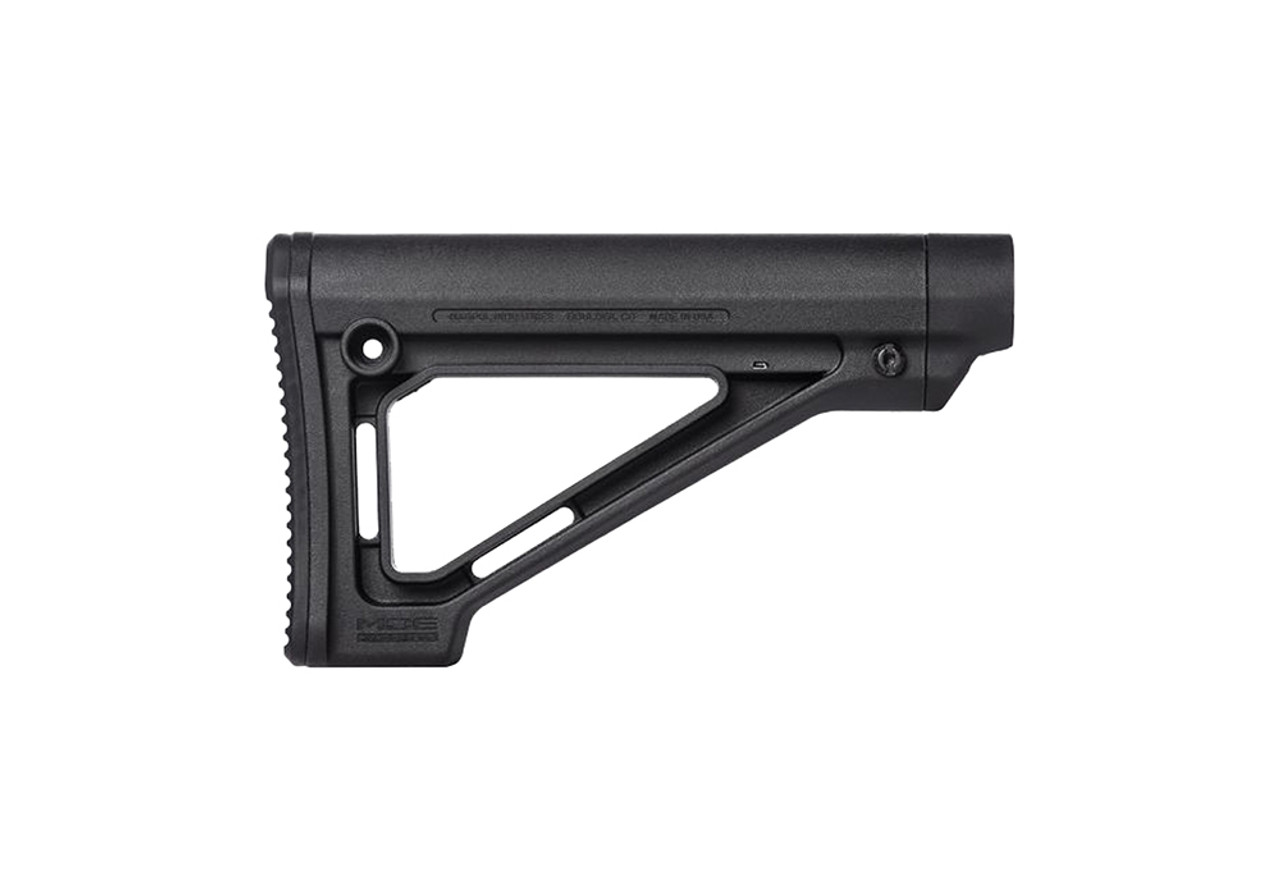 Rifle buffers are still around, but honestly, they aren’t seen as often because they’re from an older generation’s design for buffer weights. Most people just use carbine-sized buffers now.

Rifle buffers vary in weight from 5.0 – 5.2 ounces. Those who do use rifle buffers usually pair it with a fixed stock, such as the mil-spec A2, VLTOR A5, Magpul PRS, or MOE Fixed Carbine Stock.

H3 buffers weigh between 5 to 5.4 ounces, the heaviest among carbine-sized buffers. If the H2 still felt too punchy for you, the same concept from above applies here — the H3 will move even slower due to the heavier weight to alleviate even more recoil.

The caveat that all builders should know is that if you go with too heavy of a buffer it can cause the rifle to short stroke. Short stroking can happen with any firearm and symptoms include failure to feed and failure to extract.

You might instinctively assume that the H3 buffer, most suitable for AR-10 builds, is the heaviest buffer weight out there. False.

Pistol caliber buffers are actually the heaviest. Their weights can range from 5 – 8.5 ounces.

Pistol-caliber ARs utilize a direct blowback system which applies more pressure to the bolt carrier group than a gas system would. A heavier weight is then needed to soften that impact on the BCG.

If you’re looking for more luxurious and newer designs for a buffer solution consider these:

The Geissele Super 42 features a braided wire buffer spring that completely removes the annoying “twang” sound that can come from many recoil springs as they are compressed. Geissele carries these springs with buffer combos in every “H” designated weight (H1, H2, H3).

As we’ve covered in previous blogs, JP Rifles are not for the faint of heart. They’re some of the fastest race guns around that have been consistently winning competitions around the country.

Now, JP Enterprises is on their 2nd Generation of the Silent Captured Spring which has a self-contained buffer spring system. It has a reputation for making their rifles be the quietest and one of the smoothest rifles on the market.

The Silent Captured Spring is pricey but is available for a wide variety of rifle setups including AR-15 carbine or “standard” buffer, H2, and H3 weights. It will work for AR-10 rifles, AR-9 rifles and they even have a version that is compatible with Law Tactical Folders.

This is a brand new collaboration between world class shooter Jerry Miculek and Big Daddy Unlimited.

They have recently developed a patent-pending buffer system that is fully adjustable per your needs.

If you want to be an early adopter the Miculek Magnetic Buffer System is definitely worth checking out.

Our Recommendation for Choosing a AR-15 Buffer Weight

Once you start shopping for buffer weights, you’ll quickly realize that there are a ton of options.

Moreover, you’ll have to pay more attention to the exact weight than the (H) number designation, as the weight can sometimes overlap with other “H” buffers.

So here’s the breakdown of our suggestions:

If you ever experience issues with moving up in buffer weights, you can always go back to this one to have your rifle run 100% of the time.

We’re not adding a whole lot of weight moving up from carbine buffers to this one but it is possible for some carbine and mid-length rifles to have cycling issues with the added weight.

However, if you’re using a factory-built rifle it should be just fine as they come over-gassed enough to be able to handle it.

We do not recommend H2 buffers for carbine-length rifles, and while it can work for some mid-length systems, it’s not a very commonly used weight.

Consider getting one if you are doing some sort of DMR clone with a fixed stock setup; otherwise this buffer weight isn’t really the best option for your AR-15.

If you need an AR-10 buffer weight, this is the one. For .308, 7.62×39 and larger calibers, H3 will be your best bet as you’ll need the heavier weight to be able to mitigate some of that recoil.

The good thing about “H” designated buffer weights is that they’re pretty affordable, so it wouldn’t hurt to buy a few different ones to see how they behave with your rifle. That being said, specialized buffers are also super cool, but will cost significantly more, and might not be as viable to experiment with.

So make sure you do your research and read or watch as many reviews as possible before making any purchase(s).

As anyone who builds their own AR-15 can tell you, it helps to have easy access to comprehensive resources before starting a project. At 5D Tactical, we have the knowledge and collaborative spirit to help you build your perfect carbine at home.

When it comes time to select a buffer weight, we can help you narrow down the ones that provide the smoothest, most reliable firing process. This ensures that you can be accurate, precise, and properly prepared.

At 5D Tactical, we believe that 2nd Amendment rights apply to building your own arms as well. To find the perfect buffer weight for your AR-15, reach out to our team today.