Although many rifle types are used for hunting, two of the most popular rifles in America are the AR-15 and Bolt-action rifles. Both rifles can be great for hunting - depending on what you are going after to fill your freezer, but there are pros and cons to both rifles for hunting. Despite what the gun-grabbers and media would like you to think, both weapons have had variations used in war and both weapons have been and still are, used for hunting. Let’s take a look at the differences and pros and cons of both types of weapon!

Media and gun grabbers alike seem very keen to classify these types of weapons as different when in reality they are not dissimilar. Many people hunt with an AR-15 and therefore, an AR-15 is a hunting rifle - a darn good one as we will see. Many people hunt with semi-automatic, single-shot and other types of rifles. It is important to not how politicians, anti-gun folks and the media do everything in their collective power to force the notion that an AR-15 is not a hunting rifle.

One of the most popular rifles that we can buy in America is the AR-15 and its many variants. The AR-15 was originally developed by a company named Armalite in the early 1950s, and was specifically designed by Eugene Stoner. Despite what the politicians lie about, the “AR” in AR-15 does not stand for “Assault Rifle”, but “ArmaLite.” In 1959 Armalite sold the design for the AR-15 to Colt, who began production and eventually landed a U.S. Military contract to produce the weapon in a select-fire version known as the M-16. 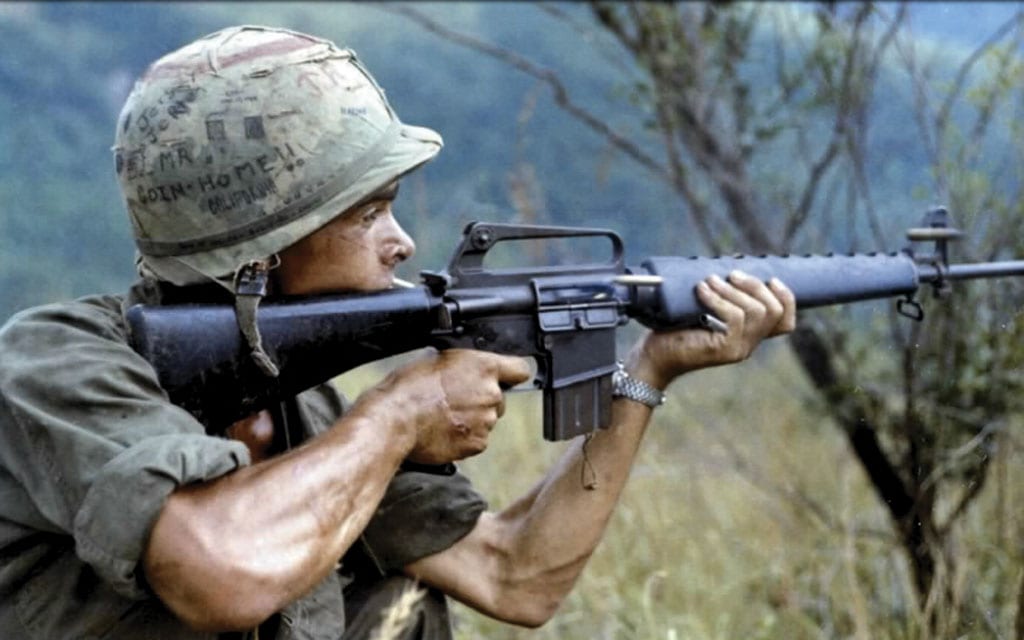 The M-16 saw widespread use in the Vietnam War. Source: Historicalfirearms.info

The AR-15 is a semi-automatic, gas-powered weapon. This means that every time you pull the trigger the weapon fires, gasses cycle the bolt, removes the spent cartridge and loads another one from the magazine. AR-15 is the designation usually given to weapons chamber in 5.56 NATO or .223 Remington, although other AR model designations such as AR-10 are chambered in .308.

AR-15s are perhaps the most versatile, modular weapon systems ever offered to the public. These rifles are available in a variety of caliber and nearly every imaginable accessory is available to the AR platform. They excel in home defense situations, are rugged and reliable and can be customized to a level previously unimaginable for every shooter. Rifles in the AR-15 family of guns have been utilized in nearly every aspect of shooting since the inception of the gun.

Benefits of an AR-15 are truly vast. In addition to the weapon being (in general) lighter and very little recoil, the AR-15 is one of the most customizable and versatile weapon systems available today! Nearly every part of the AR-15 can be customized to the shooter’s liking and necessity. From stocks, grips, fore grips, gas systems, optics, barrels etc, there is very little you cannot do to make an AR-15 your perfect rifle. Even upper receivers can be changed to allow different cartridges to be used. Another plus? The AR-15 is a semi-automatic rifle that allows for very fast follow-up shots which can be very handy when hunting small, fast game. Keep in mind to check your local state laws before hunting with your AR-15. Many states have restrictions on capacity and the size of the round you are shooting in regards to different types of hunting and it is important to check before you go.

What is a Bolt Action Rifle

The Winchester-Hotchkiss 1883 Bolt-Action Rifle, “The Gun That Won The West.” Source: Forgottenweapons.com

Bolt-action rifles typically feed from an internal magazine inside the rifle. For each shot that is taken, we grab the lug handle attached to the rifle’s bolt, push it upward and pull it back. Lugs on the bolt grab the spent casing and inject it as the bolt moves rearward. Then you push the bolt forward and down to lock in the next round being pushed up by the magazine to make the rifle ready to shoot again.

From snipers to target shooters to hunters, bolt-action rifles have been used by many civilians and in the military across many conflicts for hundreds of years. These rifles are preferred for hunting big game and are chambered in many cartridges the AR-platform is not available in yet. Bolt-action rifles are dependable, with minimal moving parts and less to malfunction. Hunting rifles need to be accurate as well, and this is another reason you will see many hunters carrying a bolt-action as their preferred hunting rifles.

As we touched on above a bit, bolt-action hunting rifles are available in nearly every chambering we could possibly imagine. Ever heard of a 6.8mm Western? Most have not, but you can get a bolt-action rifle chambered in that caliber. These hunting rifles can also be more affordable than the AR-15 because at the end of the day, these are much more simple guns in general. Be sure to do your research and find the right caliber for your hunting rifle to ensure success when you finally have the chance to take that long-awaited shot on your quarry.

So which one should we choose? A bolt-action hunting rifle or an AR-15? That is the question we came here to ask. Although bolt-action hunting rifles are proven and reliable, the AR-15 platform is also proven and reliable. While you might be able to get that exotic caliber in a bolt-action rifle easier, you also might be able to find something that works in an AR platform as well. AR-15 models are chambered in many heavy hitting rounds for big game such as .308, .450 Bushmaster and 6.5 Creedmoor.

Ar-15s might have more moving parts compared to the bolt-action hunting rifle but that does not mean it isn’t an overall superior rifle platform. Semi-automatic rifles offer quicker follow-up shots and the ability to stay on target better in case you miss your first shot. Bolt-action rifles are slow for follow up shots and require a lot of practice to cycle the bolt manually and keep on a moving target should you miss the initial shot. In the end, we love both rifles for different reasons, but it is hard to beat the AR-15 platform of rifles for anything from home defense to hunting. Add in the modularity of the AR-15 platform and the bolt-action hunting rifle comes in second in our book.

Assemble an AR-15 with 5D Tactical!

We hope this was a helpful way to understand the differences between bolt-action and AR-15 platforms when it comes to choosing the right hunting rifle. Good luck on your next hunt! If you are ready to build your own AR-15 platform rifle we would be honored if you would check out our products here at 5D Tactical. From full build kits to .308 AR-10 kits for big game, as well as a full line of parts and accessories, 5D Tactical is ready to outfit your next AR build. 5D Tactical looks forward to earning your business! Until next time, have a great day and Godspeed!